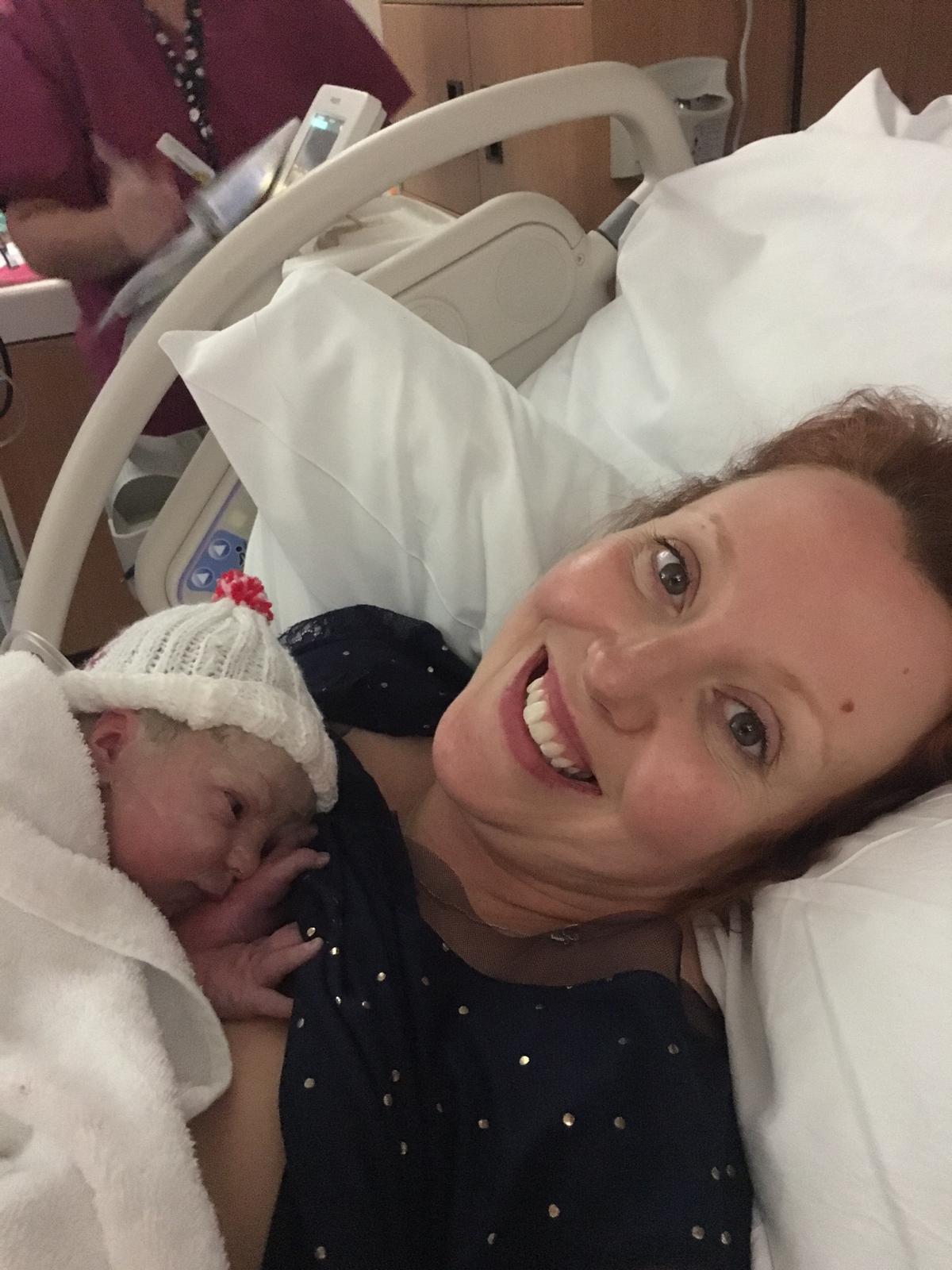 Such a big topic to cover and so much to say! If you would prefer to watch rather than read, I will also be making a YouTube video covering this soon too.

So, I’ll pick up where the last pregnancy video update left off which, in a nutshell, detailed my waters breaking at 34 weeks, my labour grinding to halt and being allowed home after 4 days in hospital and then returning for induction on the first day of my 36th week, Wednesday 11th December 2019.

Being allowed home was AMAZING, I was worried they would keep me in because my fore-waters had broken and I was at risk of infection but alas, heavily pregnant, I got let out to tend to my horses, batch cook and bake no end of cakes for our ‘Big Day’ Hamper! 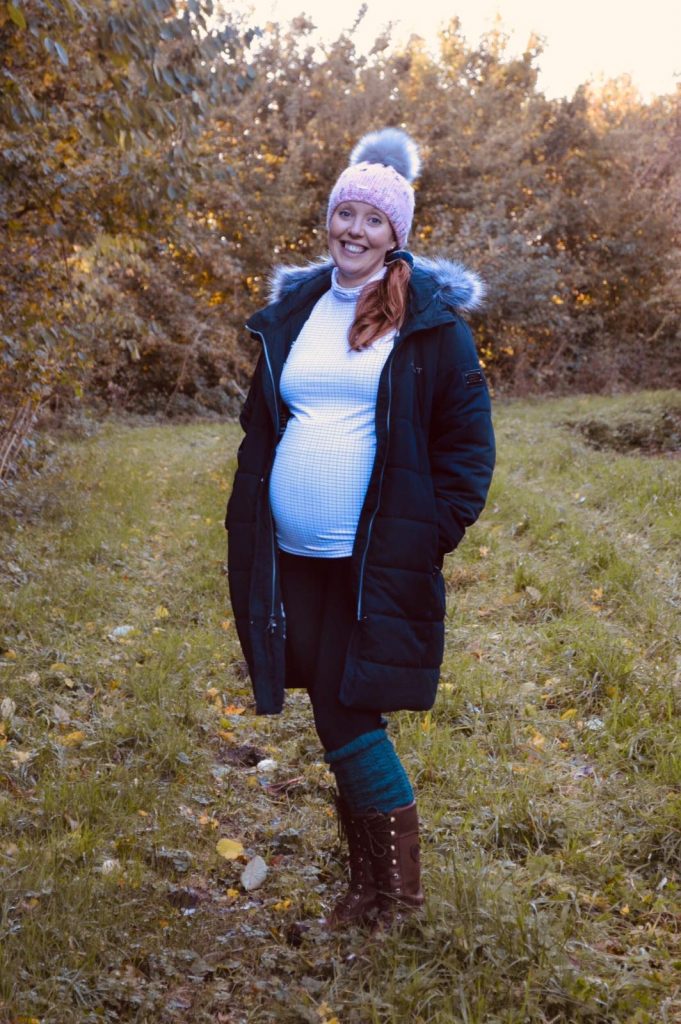 It also RAINED… A LOT! It was the wettest December on record and lugging hay out to the field was becoming impossible. I don’t know quite what I’d have done without my husband and our friends Pirate Dan and Auntie Smurph (Who was also about to have her baby in the coming weeks!) 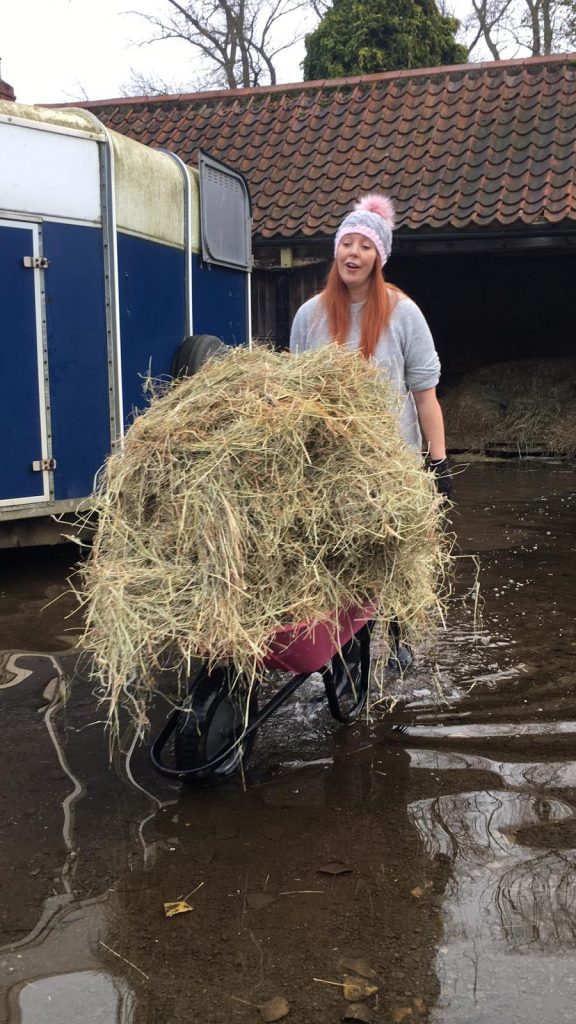 That’s really all I did in those few days, wait for labour to potentially start on its own and try not to do too much.  I did however, attempt some log stacking in the shed on the Saturday and it turns out that this was not my brightest idea, resulting in a lot more fluid loss and a hospital check up. Everything was fine though. 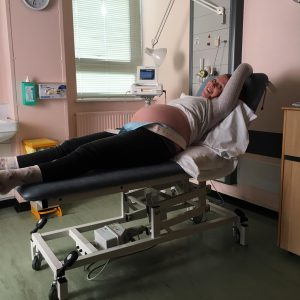 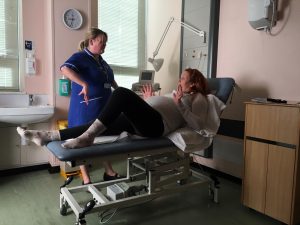 I had been waking up early and uncomfortable for the whole of my third trimester so today was no different.  I got up and ran a bath, something I was advised to avoid during the in between stage whilst at home – probably because of the infection risk – but I thought today, of all days, I want to be relaxed.

Over the last few months I had been rigorously studying hypno-birthing with the help of the simply AMAZING Bump to Baby Chapter online course. This is a series of online videos and note packs made by a very wonderful midwife who I can honestly say, completely changed EVERYTHING about this day for me.

You see, I wasn’t scared AT ALL. I wasn’t anxious, I was just excited and felt more determined and powerful than I have ever felt in my whole life. I did my hair and put on a bit of make up, then packed a full on picnic hamper to the brim with homemade Christmas cake, chutney laced sausage rolls, mini sandwiches, booze, chocolates, sweets, you name it, I packed it! We waddled down to do the horses and then made the drive to hospital for my ‘slot’ at 1pm!

It Almost Didn’t Go That Well…

When I was taken into hospital the fortnight before, I had been lucky enough to have been allocated a private room off the main ward where I spent my 4 (rather pleasant in hindsight) days. This time, when I was shown to my bed, it was on a communal ward with 5 other beds housing 4 other ladies in various stages of labour/post birth.  Believe it or not, I DO NOT MIX THAT WELL WITH STRANGERS.  I am anxious meeting new people, I was shocked at my new surroundings and when I met the midwife on duty, I fell into panicky sobs which she misunderstood for fear of inducement… I had to quite gregariously explain that (in no uncertain terms) “I f*cking hate people!” – I think my position was clear at this point!

But, there was nothing she could do. Once I realised that I wouldn’t actually be giving birth right there in that communal bedroom, and I managed to pull myself together but the thought of having my minky hanging out with only the briefest of curtains around the bed made me VERY anxious indeed. 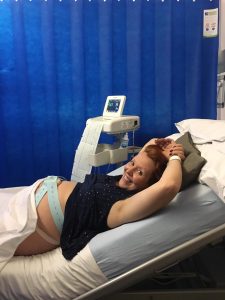 After an examination of the invasive kind (up in my area), it was confirmed that I was still 1.5cms dilated as I had been for the last two weeks! The next step was the insertion of a gel that brings on labour… I am not a medically trained professional, and so I wouldn’t like to have a guess at what this is but I think it was some form of oxytocin hormone.

Juice inserted, we were told that a bed was booked on the labour ward at 9pm and to get comfy until that time. SOLD! I had my hamper, it was the week before Christmas so my film list full of JOY was at the ready, I was settling in and not one tiny bit nervous now.

20 minutes into Love Actually and I was in some fair to moderate discomfort, my body started to contract, the feeling of needing a poo was so very powerful and the monitors and beeping from the machines I was on went into over-drive.  The next few minutes were a bit scary I have to say…

Suddenly surrounded by a doctor, two midwives and a nurse, who also appeared to be panicking a little, they needed to stop what was happening. My body was trying to push the baby out long before my cervix was effaced enough to squeeze out a golf ball let alone a human head.

I had muscle relaxants and a concoction of drugs and everything suddenly calmed down again. Back to the film! Jeez! 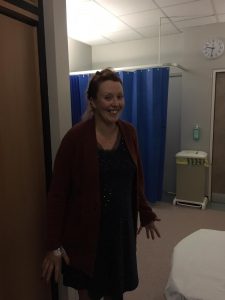 Blink and you’ll miss it!

This photograph (above) was in fact the last photograph taken of me still pregnant, you’ll see the time in the background was 9.30pm. I was in the labour suite and so much more relaxed.  I loved the solitary confines of a private space and we had the most wonderful view of Lincoln Cathedral.

I was having regular tightenings at this point… they call them this because it would be wrong to assume that what you were having were ‘contractions’.  Contractions are the work of Satan and tightenings are not.

Laughing and joking around as usual, I had the rest of my waters broken at midnight because not much was happening and I was still only 3cms dilated (You need to get to that magic ten cms to get the baby out I think!).  The doctor does the water breaking with a ‘hook’ that tears a hole to let the fluid out, this is in hope of progressing the labour into that final stage. IT HURT LIKE HELL! I actually needed gas and air for this – and I have to say – it did get me a little bit worried about how painful getting this baby out was going to be!!

The contractions started pretty soon after this point. They were sore – but I loved the feeling of every single one of them. I knew the more they hurt, the closer I was to the end goal. I knew I could do it, I knew what my body was doing and I trusted it implicitly not to let me down. I was in a great deal of pain and with only gas and air, I requested a review of my pain relief having been informed that I was looking at another 4 hours of work still to do.

He had us all fooled!

Within 10 minutes of the doctor and midwives leaving me to settle before injecting me with dihydro-codeine, I felt the strongest urge to push.  They said 4 hours, but the reason the pain was so intense was because, on current examination, I had gone from 3 to 10 cms dilated in less than 10 minutes! And yes, I was pushing, the baby was coming.

I felt incredibly empowered giving birth, I loved pushing (In my head I was trying to roll a 12ft hay bale on my own with each push!), I gave it everything I had and more with each urge. It was over within around 7 pushes, he came out and cried that first magically relieving cry and I felt more emotion than I have ever felt rushing through my veins. Like the best XC ride you’ve ever had times a million.

This photograph was taken 2 minutes after he was born. 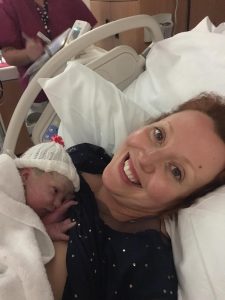 Welcome to the world my boy

George Patrick Brant was born weighing a very healthy 6lb.4oz and was bright as a little button. It was by far the best thing I have ever experienced in my entire life and there is nothing that compares to the protection and love that you feel towards that small person.

A speedy delivery meant that George had some mucus to shift off his lungs having passed so rapidly through the birth canal, but I wouldn’t have changed a thing other than to get to have another go at it.

For anyone worrying about a first time birth or getting over a previous bad experience, I cannot tell you how much the course from Bump to Baby Chapter changed my labour for the better.  I was confident, empowered, happy and I think this is the main reason I didn’t need anything further than gas and air. I trusted my body and this is so important. Learning that I’m a cat and not an elephant was pivotal (you need to give this lady a follow on social media too, I learnt so much from her – I’ll link her at the end) and I might even consider doing it all a second time if we are lucky enough to be blessed with another opportunity.

Thanks so, so much for reading, there is so much more to say about his first few days, why he had a feeding tube, and our first few days together, but I think I’ve said enough for now. Here are the first few photographs we have of our beautiful, perfect little boy. 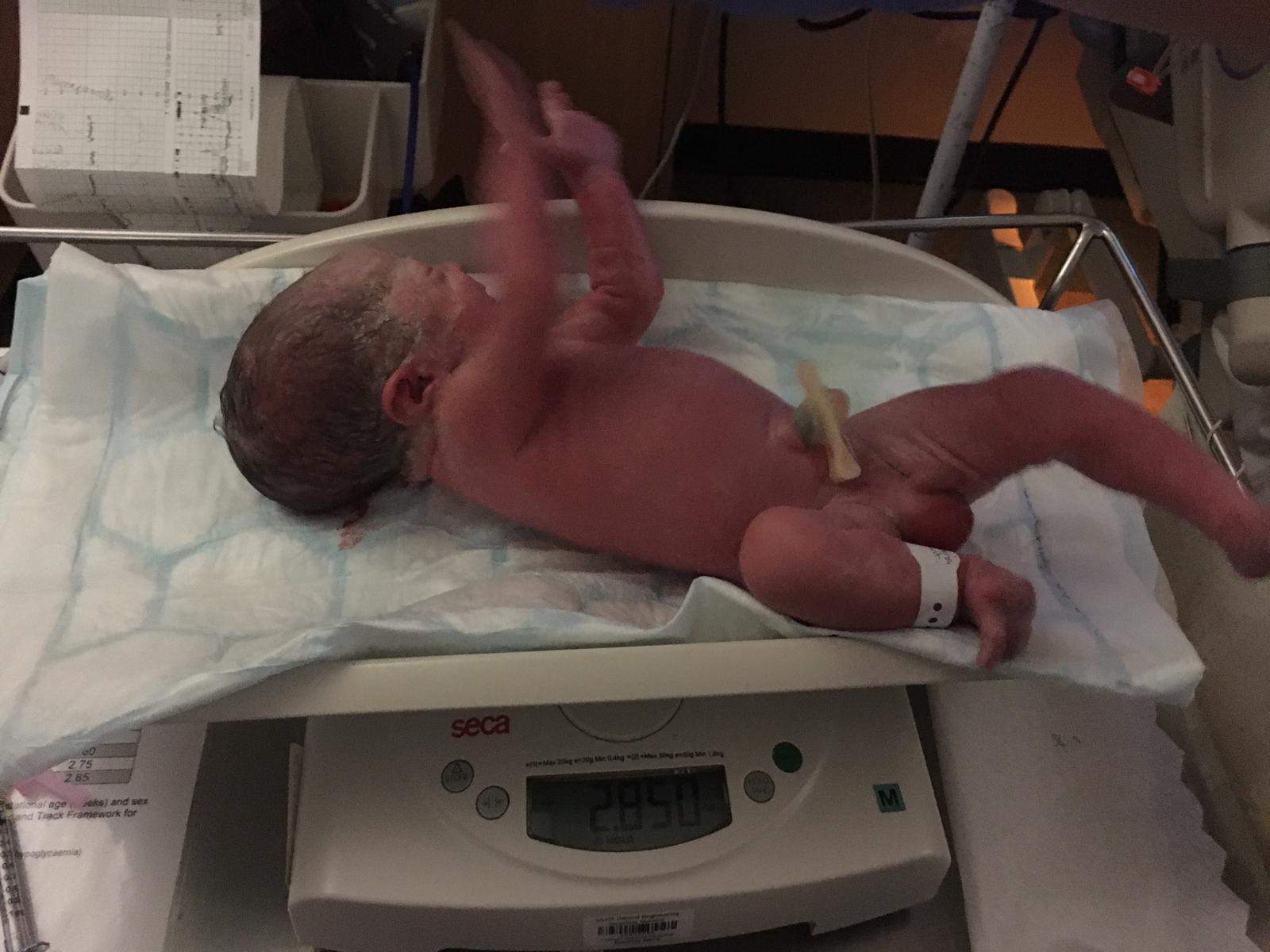 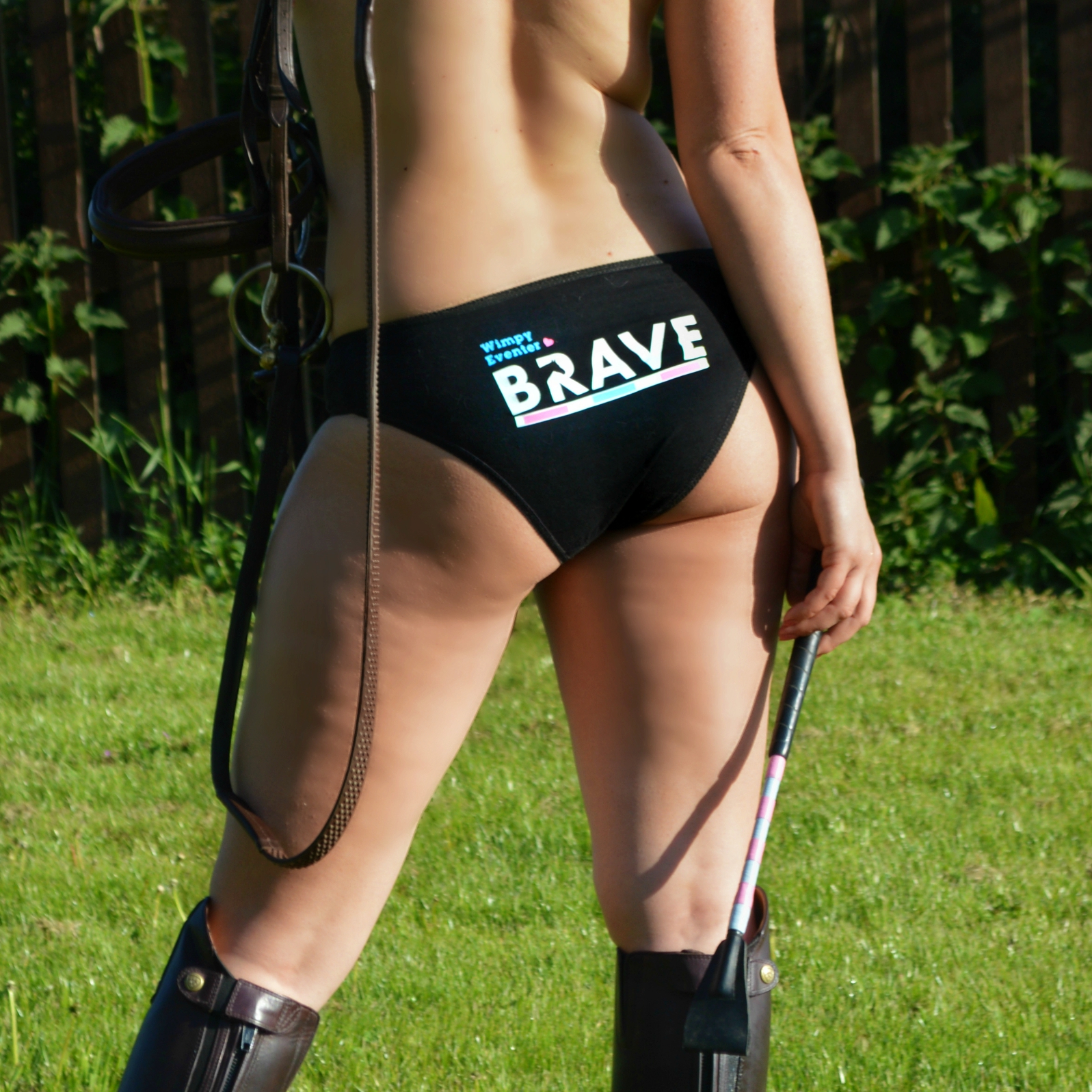 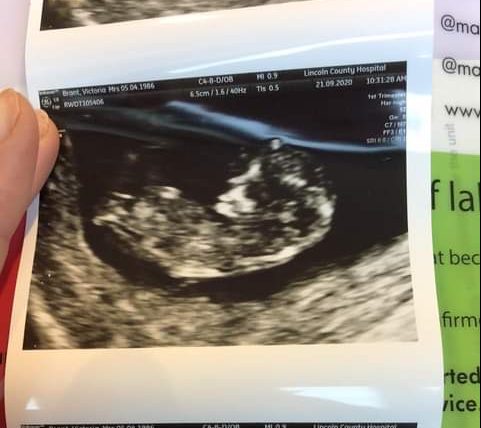 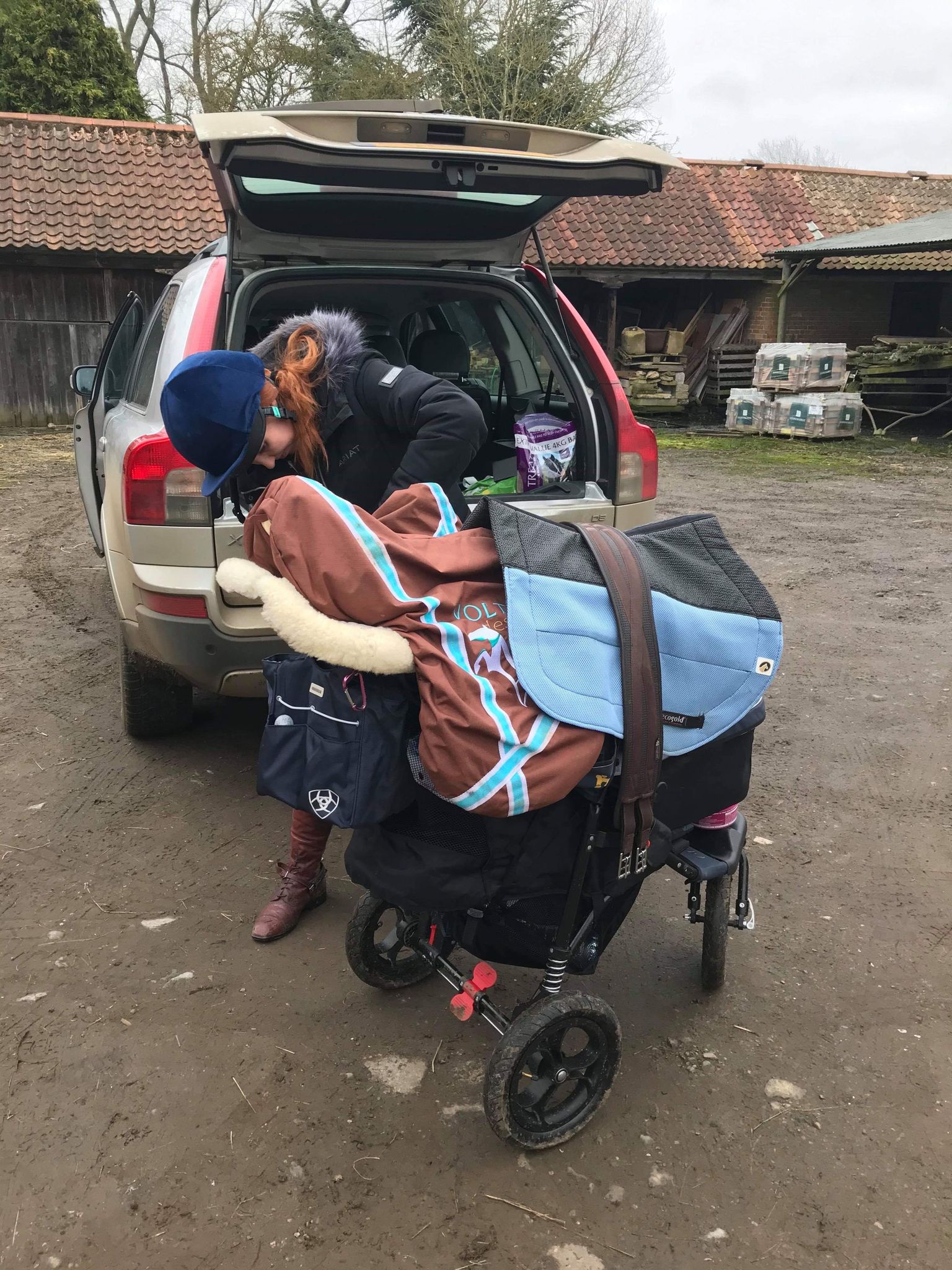 One thought on “My Birth Story”