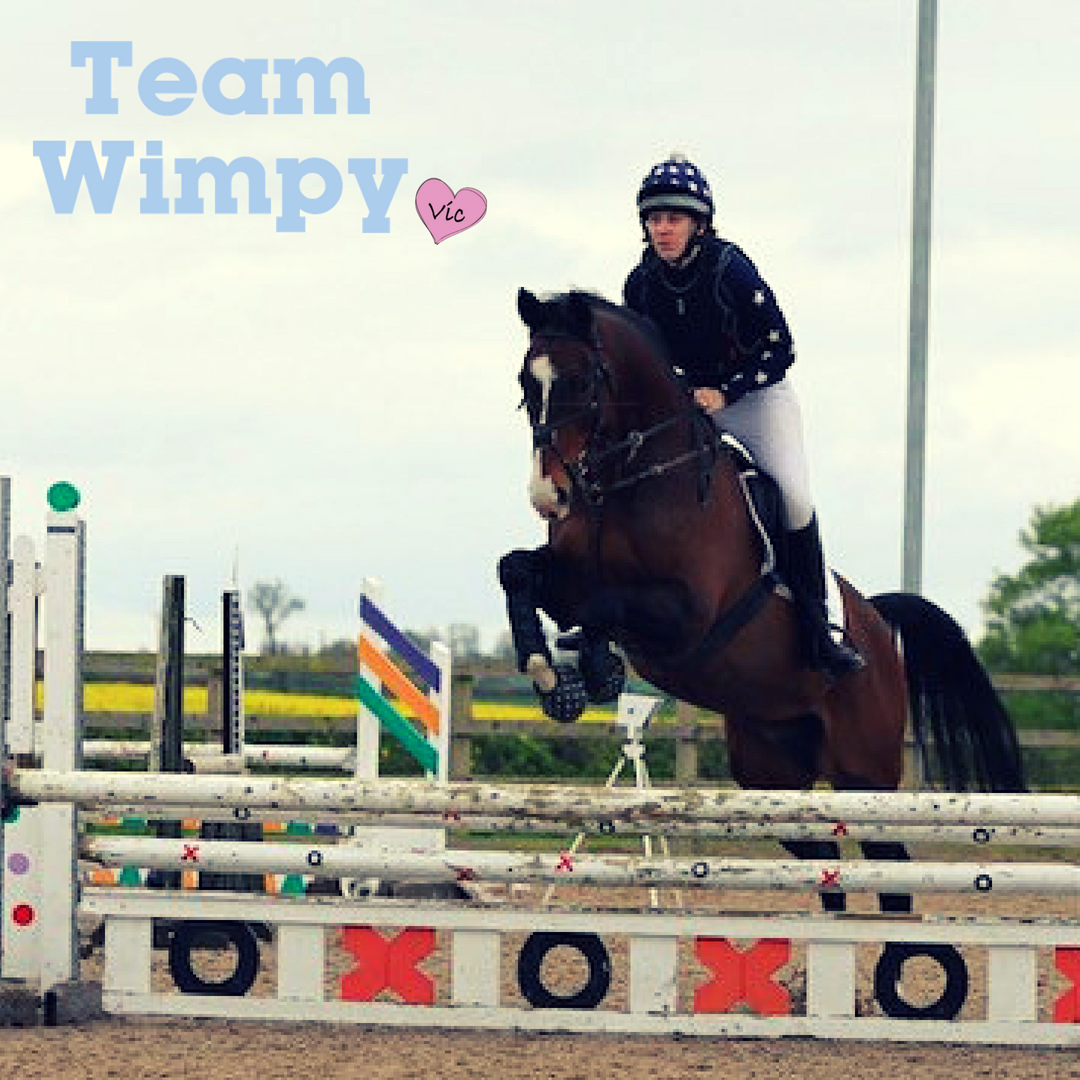 Since being picked to be part of the amazing team Wimpy in March a lot has changed for me both good and bad!

So I’m participating in the Wobbleberry challenge this year, so my aim is to complete a BE80T by the end of the season!

Bridget was to be my wobbly partner and to an extent we were both learning together! Bridget being a mare is very opinionated we parted ways more than I like to even think about, she’s an incredibly talented mare but has the attitude to go with it. My main problem with her was actually being at shows as soon as we went into the arena, any arena she napped, and by napped I mean did everything she could to get her rider off so she could get back to the collecting ring! 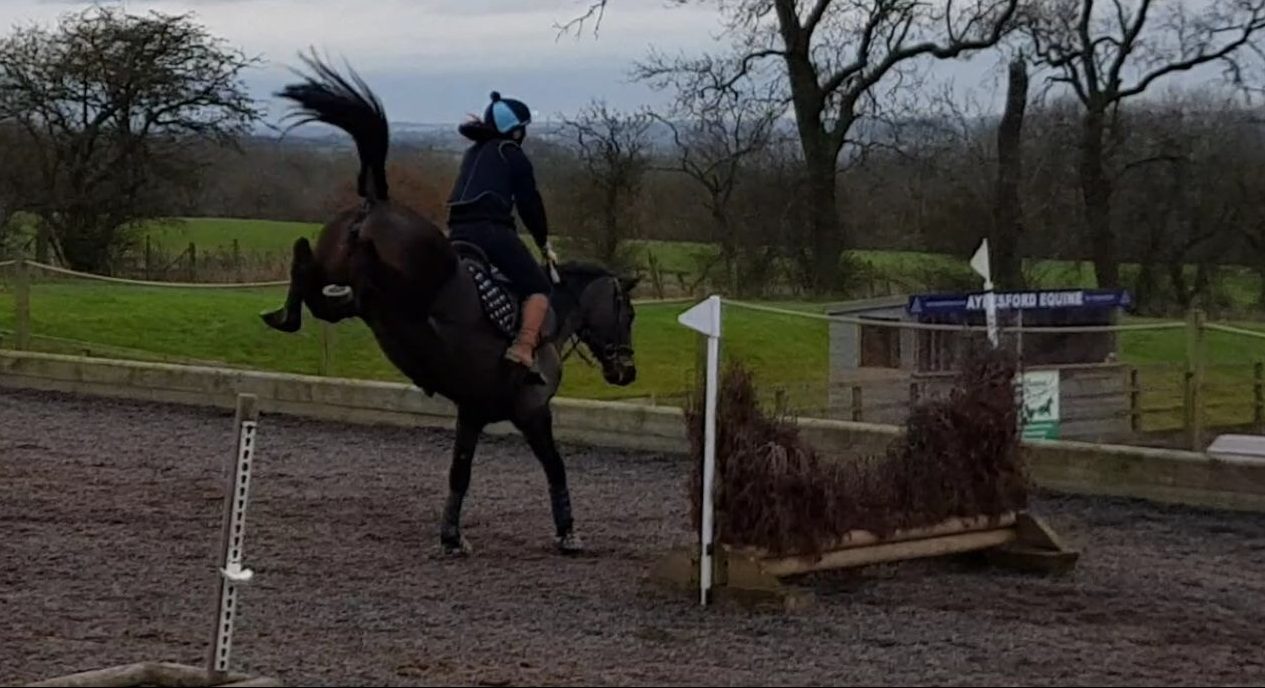 I’ve had other people ride her for me and they had the same results, had everything checked by vets, physiotherapists, dentists, farriers and saddlers but nothing could be found so we think this is down to a bad past experience!

I took her to Weston lawns for their arena eventing in Feb and she was vile, I was literally crying going round as I just couldn’t get anything out of her, she threw me badly at the second to last fence and at that point my instructor told me she didn’t think Bridget would do what I wanted her to do and I decided to stop trying to show her! She’s telling me she doesn’t want to do it and neither of us was having fun!

Riding needs to be fun, you need to enjoy it, both of you do!

It can’t be a fight all the time! Bridge loves jumping, she loves schooling and lessons but hates competing, to stop doing this was a massive decision and I was absolutely heart broken! I love Bridget more than words can describe she’s an amazing horse that has taken me from tiny cross poles to (occasionally when I was brave and she was in a good mood) over a meter, the thought of selling her on just broke my heart and I couldn’t bear the thought of her getting into the wrong hands!

After seeing how distraught I was my husband and mum decided to push me to look for a new Wobbleberry partner, however we all new it would take something very very special to get me back on track to complete my challenge this year!

I’d found his advert on line and although he was over budget he ticked all boxes so we went to see him!

Amazingly his owners actually lived next door to Hannah Francis who set up the willberry wonderpony charity that I am doing my challenge for!

After passing his vetting Buck came to a local livery so I could get to know him with the use of their facilities, he’s an absolutely awesome horse, just a week after having him we complete our first dressage competition coming away with 2nd place! 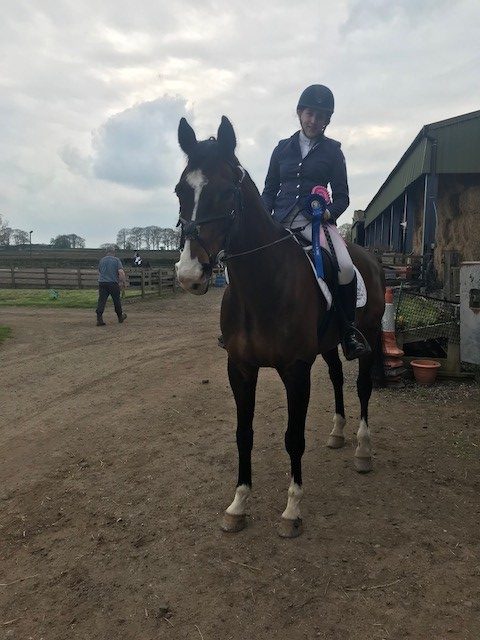 Three weeks in and I put on my brave pants and booked us on to do our first showjumping competition together! I’ve never gone straight in at 80cm but I decided too as Buck has competed much bigger in the past! Usually to do an 80 I need to work up to it with a 60 and 70 first! I was very nervous but he was amazing! A bit strong in places causing us to have a pole down which took us just out of the placings but a massive step for me and I was beyond over the moon. 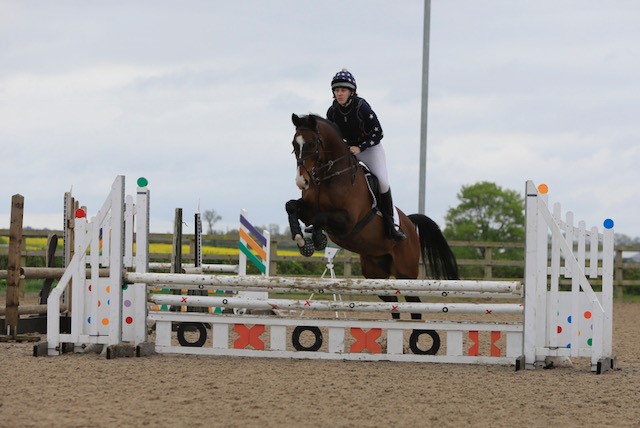 While on my after show high I decided to book our first hunter trial for the following week! As soon as I’d done it I regretted it! I had dressage the day before it too so double stress!

Needless to say I felt ill for the entire week leading up to it! By the time the dressage came around on the Sunday the weather was beautiful. Buck warmed up beautifully and I was feeling pretty confident, jay my husband passed me a bottle of water and the crinkly sound spooked buck who proceeded to flat out bolt around the school! I had no strirrups and am not very balanced at the best of times, I could not get enough weight behind me to pull him up so we kept going round (I’m so sorry to the poor woman who’s test I went through about 4 times)
I was looking for the best place to bail as people threw themselves in front of him and tried to grab him, but I knew I’d hurt myself badly coming off at that speed!

Luckily I managed to turn him in circles to slow him down without falling off the side! No one thought I’d get back on (including me) let alone so my test but I think deep down I new that it was just a spook and me grilling with my legs through not having stirrups pushed him to go faster!

We muddled through our tests but he was worked up and I was nervous and very tense so we only ended up with 61% and 60%, we did manage to get second place though!

The next day was awful! The thought of doing the hunter trial (my first ever proper one and first ever at 80cm) literally made me sick! I was messaging the other members of team wimpy and they were giving me lots of awesome wimpy advise!
I donned my awesome new base layer and off we went!

Buck was impeccably behaved, he knew I was nervous and didn’t put a hoof wrong! We flew round the course and I can honestly say I’ve never felt anything like it! He soared over everything without a second thought to put us in 9th place and we got asked to be part of the riding clubs eventing team! I’m beyond happy! Finally on track for my challenge, in fact I’m thinking I may even be able to bring it forward! 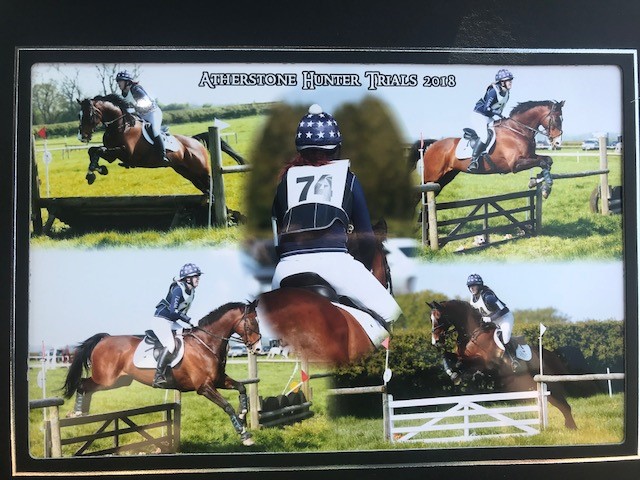 I have Vera’s trailblazers second round at western lawns this Saturday and then my instructor wants me to enter Solihull one day event on 19th May! If any of you see me out and about looking green around the gills please come and say hi! Me and Ianberry would love to meet fellow wimpy and wobbly riders! 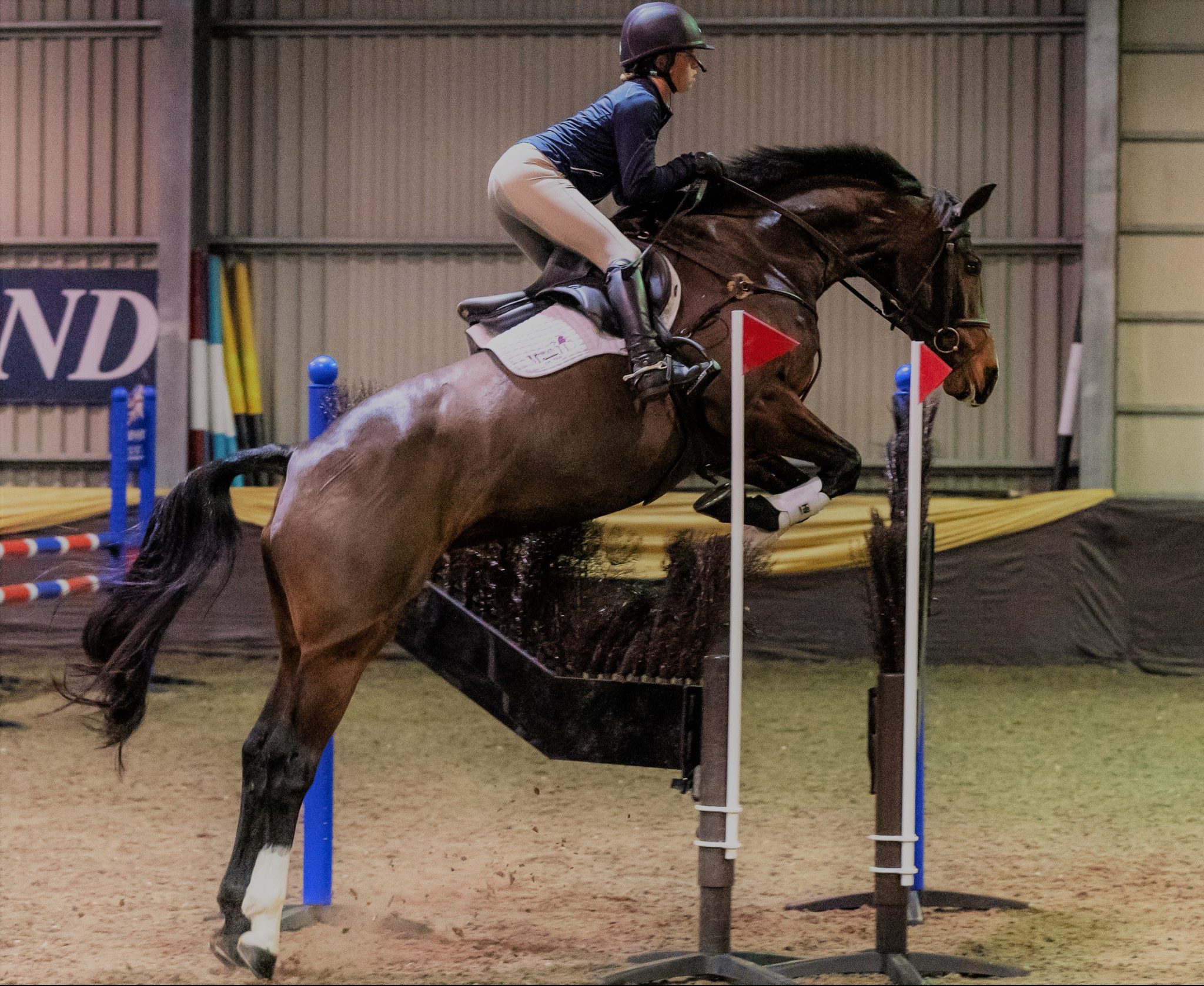 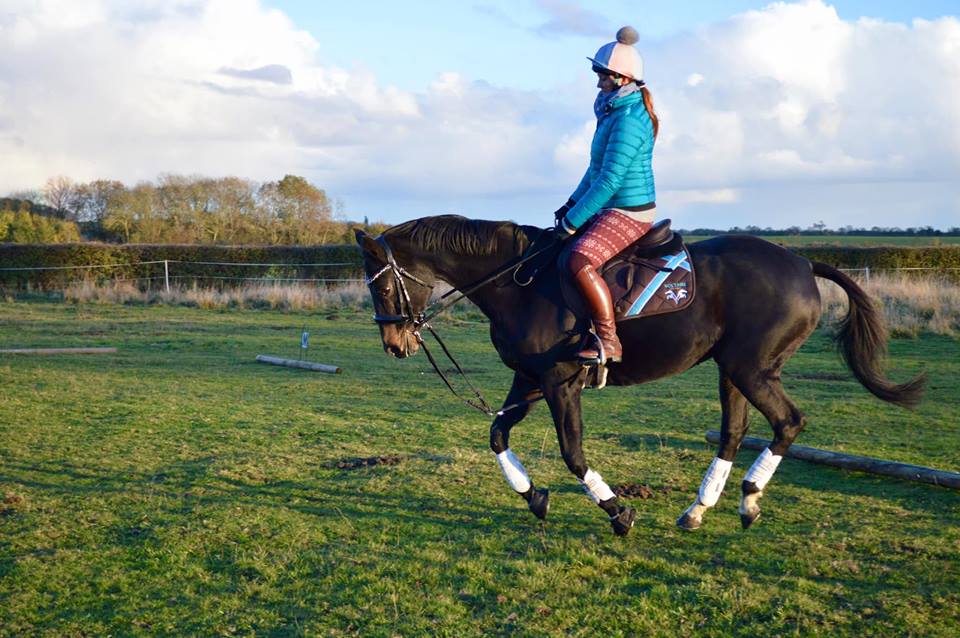 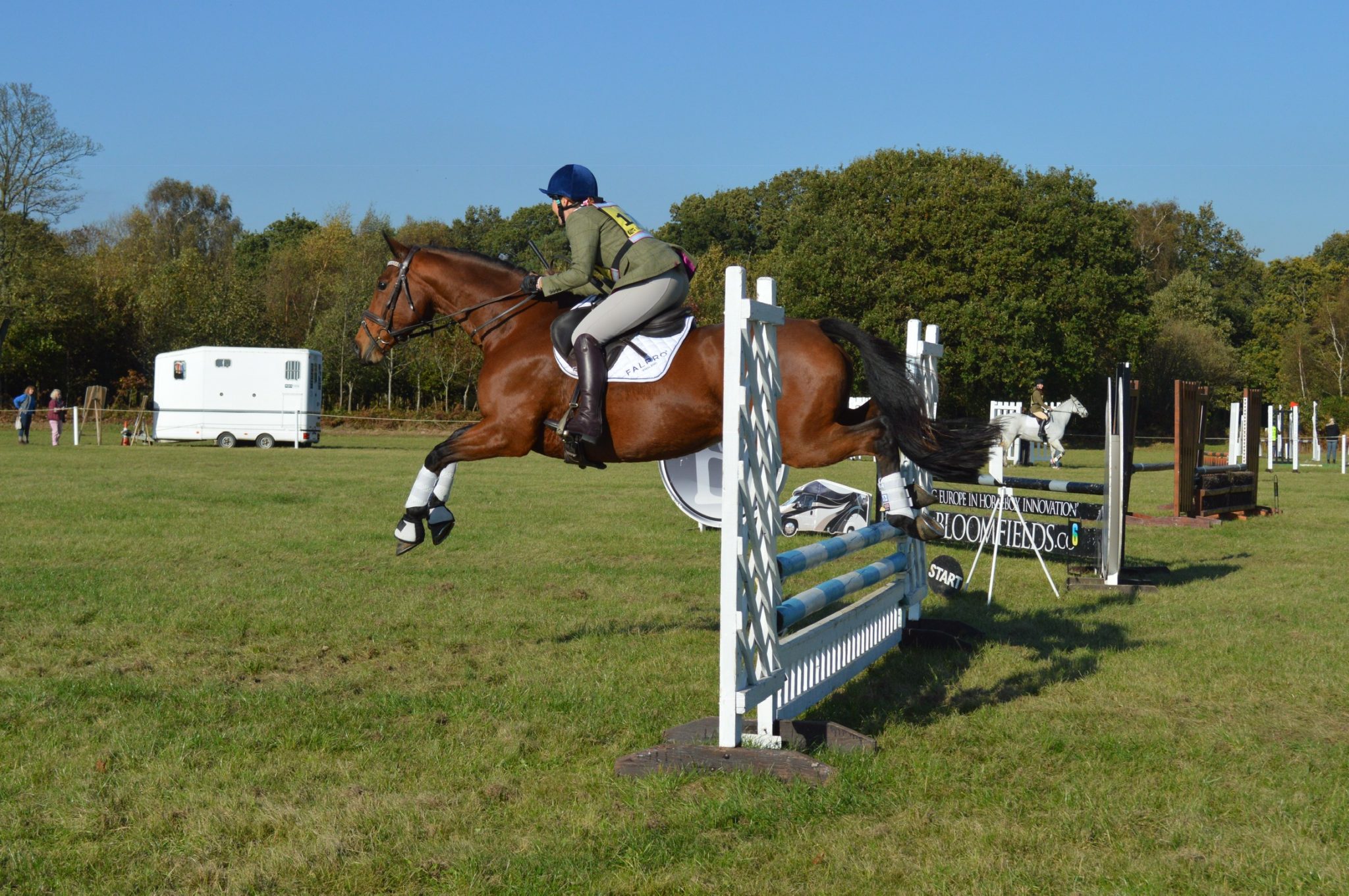